What exactly is bean-to-bar chocolate?

Bean-to-bar is a term that describes a type of chocolate production and is often associated with a specific form of trade. 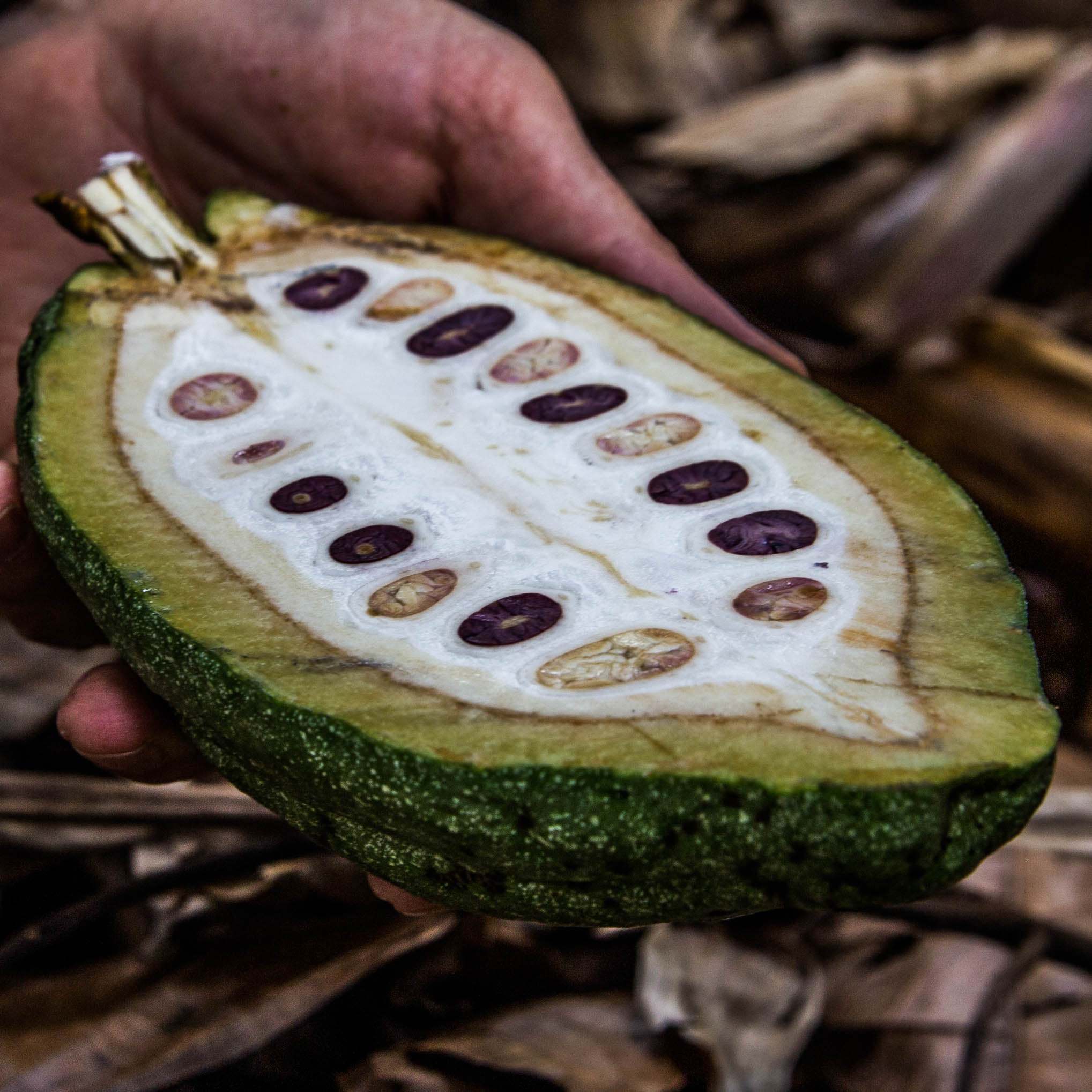 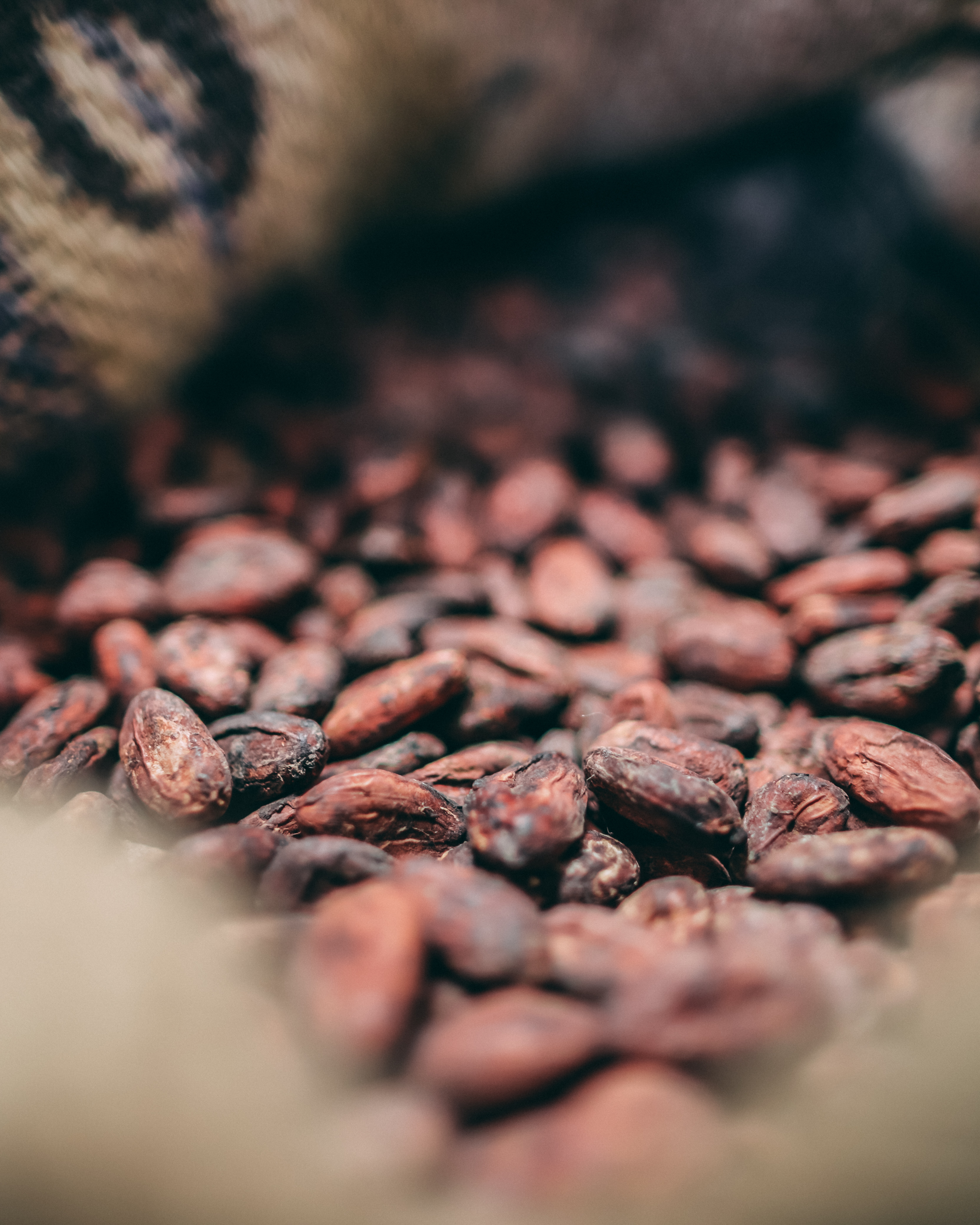 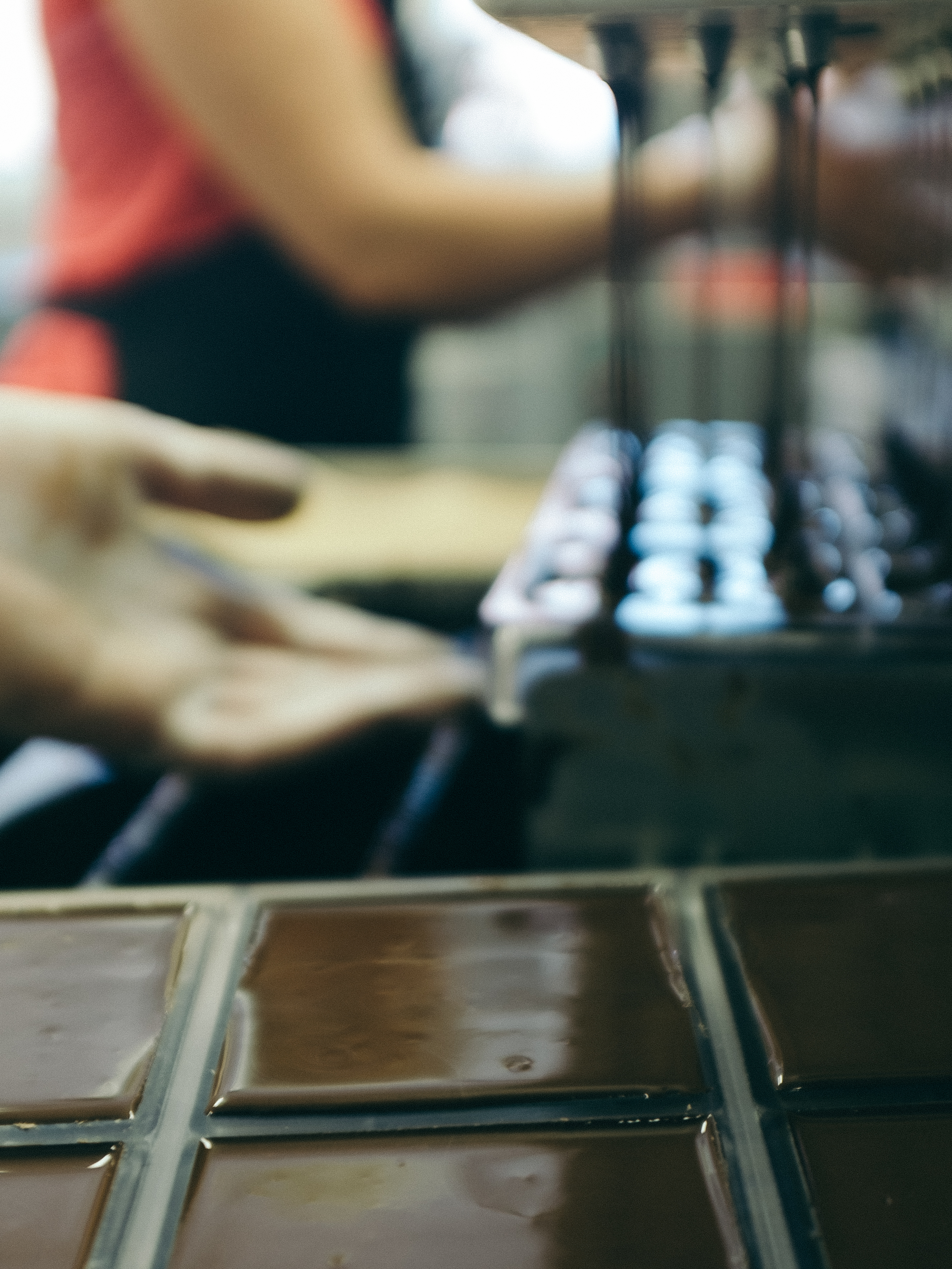 In order to be able to speak of bean-to-bar, it is crucial that a chocolate maker unites the entire process of chocolate production under one roof. This does not apply to fermentation and drying of the cocoa beans. Extensive knowledge and experience are required here, and both steps must be carried out close to the harvest location, as the cocoa pod is a very sensitive fruit that immediately reacts to long transports or temperature fluctuations with a bitter loss of quality.


When the fermented and dried cocoa beans arrive at the chocolate makers, they are roasted there, broken into nibs, their shells are removed and they are ground into cocoa mass, which can then be processed into all kinds of chocolate delicacies.

What sounds logical from a technical point of view is by no means the most common way. Many manufacturers use finished cocoa masses and only refine them with flavoring ingredients.

Of course, this type of production involves more effort. Different machines and expertise are required. The invaluable advantage of having all the steps in one hand is that you have full control over the entire process.

Cocoa is a true chameleon of flavors

Cocoa, with its more than 600 volatile aromatic substances, can have a surprisingly iridescent taste - if you let it. In contrast to industry, where chocolate always has to taste the same and as many as possible, bean-to-bar manufacturers are fascinated by the diversity of tropical fruit and therefore work with cocoa, not against it.
Roasting time and temperature, the duration of the grinding, whether conching or not, all of this is adapted to the respective batch of cocoa beans. For this they are rewarded with a wide range of flavors from toasted bread to wild mushrooms, coffee, tobacco, blackberry jam or limes.

Cocoa of the varieties Criollo, Trinitario and Nacional are mostly used for bean-to-bar chocolate, because these varieties naturally have a finer flavor than the consumer cocoa Forastero. But here, too, it is important not to put on blinkers. Forastero cocoa can also be used to make impressive chocolates with a profile. The soil quality, the care of the cocoa tree and the professional fermentation and drying are jointly responsible for a large part of the quality of a cocoa. 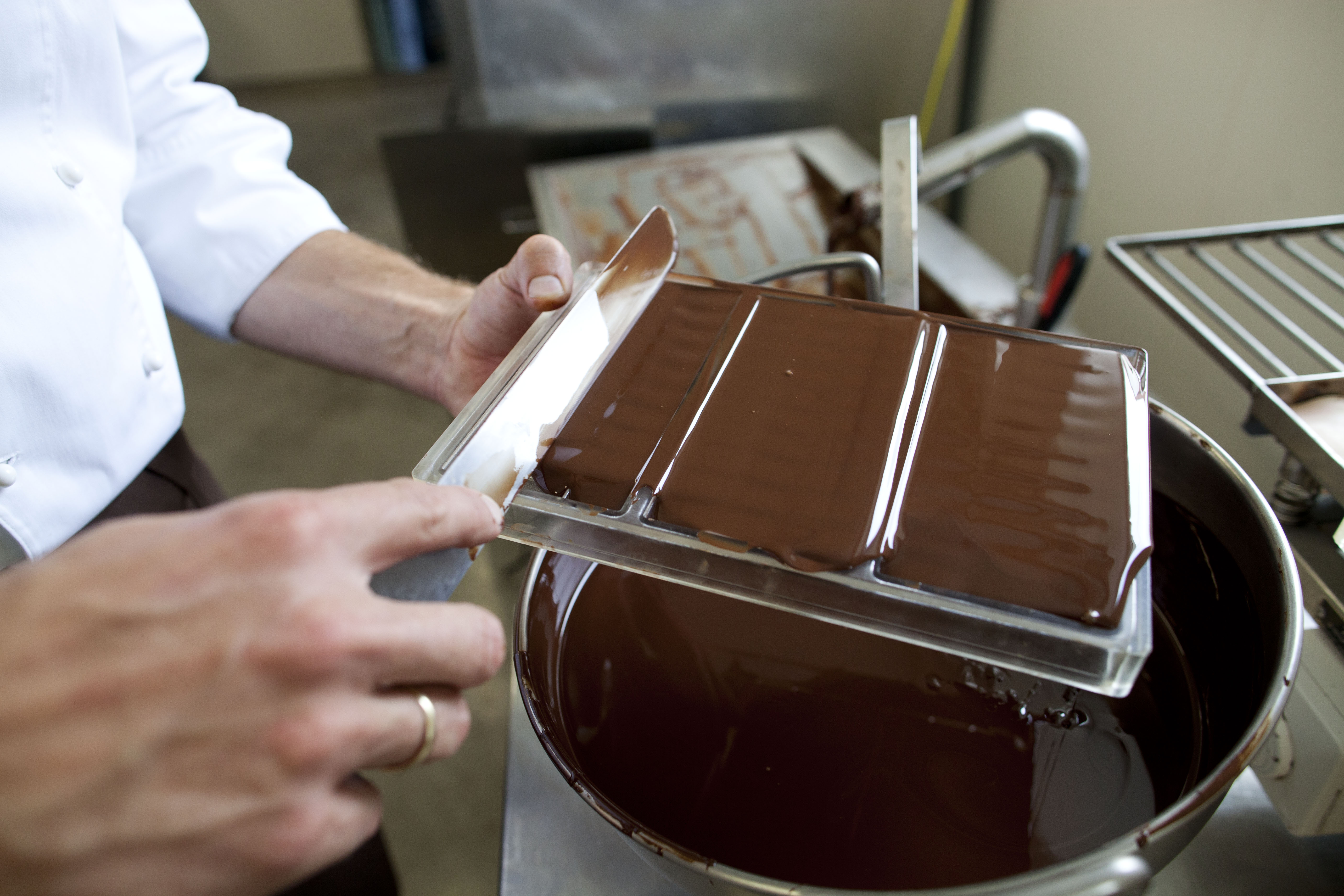 This is how bean-to-bar chocolate began

In the early 1990s, curious chocolatiers began experimenting with cocoa beans and producing chocolate from the bean. With the increasing awareness of food, the raw material cocoa was rediscovered.

The cocoa bean is the seed of the cocoa pod and contains more than 600 volatile aromatic substances. The composition in which they develop and develop depends on numerous factors, including the origin of the cocoa, the weather during growth, the duration and quality of fermentation, to name just a few.

Cocoa can be compared to wine or coffee. Even laypeople are now aware that location, climate or roasting play an important role in how the respective fruit gets its aroma and those of us who grow vegetables know just as well that no two tomatoes are the same especially sunny summer produces different fruits than a rainy one.

So it is with cocoa too. Where sweetness and melting were the trump cards in the past, we are now looking for the original, and that can even be a challenge. We find it in the variety of the cocoa bean.

In order to optimize as many of these quality-determining factors as possible and include them from the start, bean-to-bar manufacturers often forge close personal relationships with the farmers and cooperatives from whom they buy the cocoa. This creates fruitful relationships for both sides.

Better chocolate - for everyone involved

The industrial use of finished cocoa mass is above all one thing: practical. Inexpensive for the group, simple in quality management and always the same taste. However, a notable part of the necessary production steps remained in the dark. How was cocoa grown and by whom? How was it fermented? What quality were the cocoa beans?

All of this was hard to find out, and for a long time no one outside of Fair Trade and Third World stores was likely to care. If you will, the beginning of the bean-to-bar movement was also the beginning of a self-fueling revolution.
The simultaneous growing interest in nutrition in general, be it because of the constant news of bad news from the food industry or because nutrition is a simple but at the same time political means, the consumption of which has a direct impact on oneself and the environment, has a lot to do with it helped to question the familiar and to position oneself in the search for a justifiable alternative.

Most people are more interested in finding out what a food can and should do. In the age of increasingly scarce resources and climate change, questions are getting louder: on the subject of water consumption, pesticides, species protection, biodiversity, sustainability.
In the age of global networking and almost unlimited freedom of travel (viewed from our privileged location), we, as simple travelers without corporate interests, make the statement that everyone is better when everyone is better.

I had an awakening experience on a trip to Oslo. In Oslo there are numerous small wooden buildings scattered throughout the city center. These are partly covered and a mixture of seating and shelters. At these stations you can draw electricity for your cell phone while sitting reasonably protected in the dry in public places and there is even free WiFi in these wood oases. At first glance, it might seem like a trifle. At second glance, it becomes clear that it is a low-threshold offer for people of all walks of life and that it is and offer and opportunity to network for those who need it most. 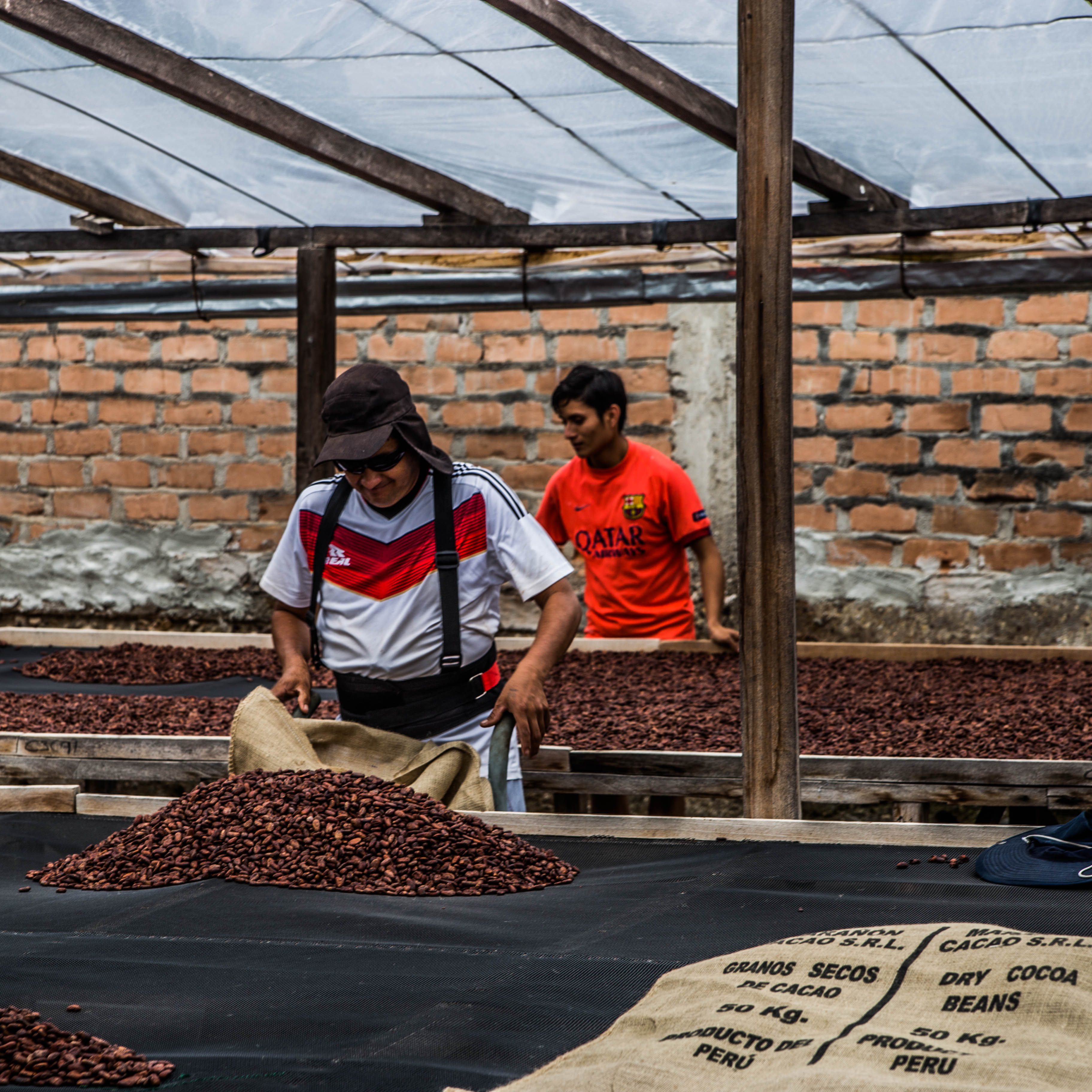 The bean becomes the bar

Bean-to-bar starts where it gets complex. The transformation from cocoa bean to chocolate takes place under one roof.
When the cocoa beans arrive, they are already fermented and dried. There are even manufacturers who do not use fermentation, but this is not a common practice. The following steps turn the cocoa bean into delicious chocolate:

The first 6 steps have a decisive influence on the taste of the future chocolates. It goes without saying that the addition of milk powder, sugar or vanilla will do their part. But what is just as crucial:
• the duration and temperature of the roast
•the grinding of the cocoa nibs (which grinder, for how long)
• the conche, if it takes place

The difference to industrial chocolate

In the past it was customary to work with finished masses or couvertures. These were only refined by adding, for example, milk powder, sugar and flavor ingredients or nuts. The finished masses were bought - ideally at a reasonable price - somewhere. These products were subject to an unwritten rule of how chocolate should taste. As pleasant as possible, not sour, not fruity, not bitter, just after - yes, chocolate. The spectrum of the possible was completely blanked out, the market was not yet ready for it.

The chocolate makers who produce bean-to-bar welcome the wildness of cocoa. Cocoa beans are flavor chameleons. They have a character that changes a little after each processing step, and yet reveals a line. It changes from fruity, nutty, tart, flowery, caramel-like, peaty to tobacco-like and, listen and be amazed, chocolatey.

And now it's the differences, the character that should be tickled out. Like us, chocolate has arrived in the age of individualism. And the different tables, terroirs and textures are by no means to everyone's taste. It is important to taste, compare and, if in doubt, even give a second chance. What was too much 3 years ago, too smoky, too much acid, may now be just right. What didn’t taste good in combination with the favorite red wine might be incomparable to the favored whites. It helps to get started by relying on the manufacturer's description and trying out what sounds appealing.

A chocolate that swings aromatically on the same wave as lime, green banana and grape? Or would you prefer the ones with notes of forest mushrooms, wood, herbs and toasted bread?